Camelon progressed to the 3rd round of the Scottish Cup with a hard fought 2-0 victory over the Wanderers at a wet and windy Kingshill Park this afternoon. Two second half goals separated the sides although things could’ve been different had Chris McGroarty converted a gilt-edged opportunity with the teams still level. Two harsh sendings off for the Forth compounded the misery and ended any realistic chance of an upset. 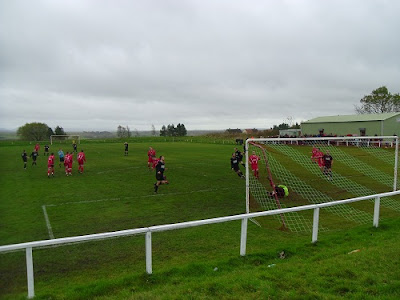 Forth matched their Super League opponents during the first half without really troubling the Camelon keeper. Wright and Canning both shot over while a McGroarty free kick was deflected into the keepers arms. The Camelon number 11 had perhaps the best chance of the first half but lacked composure and blasted wildly over. 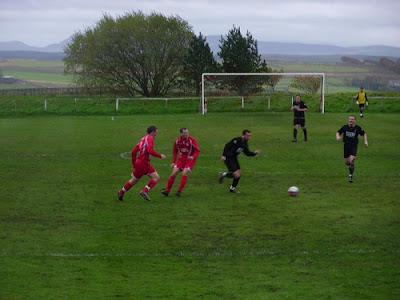 Forth began the second half on the front foot and should’ve taken the lead when a pinpoint cross from Bryan Felvus was met by the head of Chris McGroarty six yards out but the header sailed agonisingly over. This was to prove costly as Camelon opened the scoring through their number 10, who looked suspiciously offside,despite the best efforts of Lewis McKinlay on the line. Camelon were now in the ascendancy and it was no surprise when they doubled their advantage through their number 7.

The referee then took centre stage sending off Barry Canning for what appeared no more than a strong 50/50 tackle and then awarding Camelon a penalty when Lewis McKinlay accidentally handled on the line. McKinlay was also sent packing but Camelon hit the post with the penalty and the 9 men of Forth still had a glimmer of hope. Chances were at a premium however and were mainly restricted to long-range free kicks. Unsurprisingly, Camelon created several further chances with their numerical superiority but a combination of good goalkeeping and poor finishing meant the game ended without any further scoring.

Overall, a disappointing result as Forth weren’t at their best, but the Wanderers certainly weren’t disgraced against their East Super League opponents.