Disappointing result for the Wanderers tonight after an encouraging pre-season.

Wishaw started by far the better and dominated the majority of the first half creating several half chances while Forth couldn’t seem to get going, their best chance a free kick well saved by the Wishaw keeper just before the interval. Chris McGroarty was pushing forward at every opportunity but this left gaps at the back for Wishaw to exploit. The Forth management changed things on 40 minutes with McGroarty moving into midfield, Gemmell moving to left back and substitute Murray coming on at right back. HT 0-0. 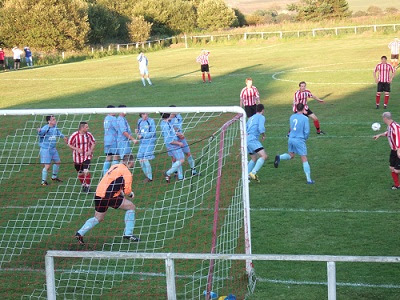 Forth began the second half brightly with another substitute Craig Crawford being introduced on the left but despite some decent possession and a few scrambles within the Wishaw box they couldn’t make the breakthrough. Wishaw though were still dangerous on the break and one such move resulted in a second yellow card for Forth centre half Lewis McKinlay who it’s fair to say ‘took one for the team’. The Wishaw bench were increasingly unhappy with some of the tackling and this resulted in one of them (the manager ?) being given his marching orders by the whistler. A late Forth free kick on the edge of the Wishaw box was blocked and the game finished goalless.

Another clean sheet for the Forth but disappointment that they couldn’t make the breakthrough in the second half despite pushing men forward at every opportunity. Having said that, Wishaw had their chances in the first half and seemed a much better outfit than the one which visited Kingshill at the tail end of last season.