Forth lost 4-2 to Carluke today despite holding a two goal half time advantage courtesy of Kenny Wright and Chris McGroarty.  It was the proverbial game of two halves, with Wanderers bossing the first half and Carluke storming back in the second. 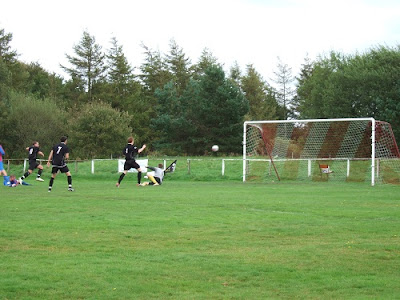 Forth started brightly and Martin Harty hit the side net within 5 minutes before Chic Clark made a decent save after 8 minutes. Forth were then denied what appeared a stonewall penalty when Kenny Wright was fouled in the box but the referee inexplicably waved play on. Forth continued to press and Alan Stevenson brought out a great save from the Rovers keeper, then the same player shot over as did Chris McGroarty. At this stage Forth were seeing plenty of the ball but it looked as though a goal just wouldn’t come. That changed on 38 minutes when Kenny Wright was sent through and despite a great save from the keeper followed up to net the rebound with aplomb. Five minutes later Chris McGroarty doubled the advantage with a deflected shot, which he cetainly seemed to enjoy. Chic Clark had one further save in the first half but overall the Wanderers were good value for their lead and had succeeded in keeping the free scoring visitors relatively quiet. 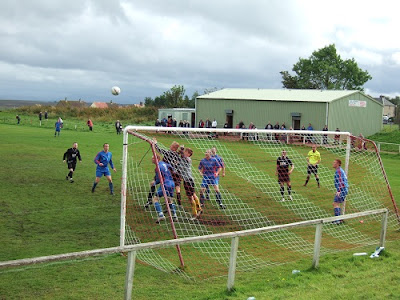 Carluke started the second half in a much more positive manner, and despite a Chris McGroarty shot which went over, began to dominate a lacklustre Forth. It was no real surprise when they pulled a goal back in the 54th minute and it took a string of excellent blocks from Chic Clark to keep the equaliser at bay. Forth had a couple of forays at the other end, a Kenny Wright effort slipping narrowly past and a Craig Crawford shot which was cleared but despite this Carluke always looked dangerous. They bagged the equaliser their play deserved on 69 minutes and from then on there looked likely to be only one winner. Forth to their credit pushed three up front, replacing midfielder Alan Stevenson with Kris Jarvie, in a bid to find a winner but it was Carluke who struck two goals in the last five minutes to seal the win. I believe the Carluke goals were scored by Arnott (2), Dickson and Grant. 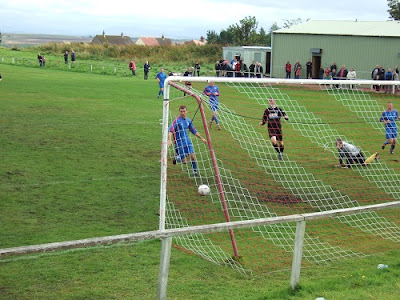 A disappointing result from a Forth perspective, but credit to Carluke for an excellent second half performance. To think at half time I was wondering where their goal threat was …
Finally, cheers to Ricky and Catherine for transport, alcohol and craic after the match.