Goals from Bryan Felvus and Chris McGroarty gave Forth a somewhat fortuitous victory at Kingshill Park today. However, the ‘Gow spurned numerous chances, especially in the first half, and must be wondering how they contrived to lose the game. 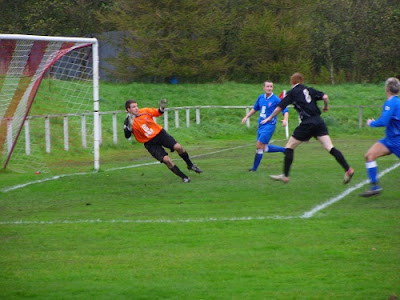 The Wanderers were without three regulars today with David Grant, Alan Stevenson and Kenny Wright all missing but began the game brightly and opened the scoring in 6 minutes when a 20 yard shot from Bryan Felvus was badly misjudged by the ‘Gow keeper and ended up in the onion bag. Chris McGroarty then flashed a header narrowly over on 11 minutes before Lesmahagow broke up the park and the striker found himself one on one with the Forth keeper but shot meekly past. Ten minutes later the ‘Gow number 10 found himself through on the keeper but once again the ball was fired wide and on 28 minutes the ‘Gow number 8 burst through, rounded Forth keeper Chic Clark but shot wide. Clark then tipped over a netbound header as Lesmahagow began to dominate proceedings and the number 10 again shot past when it seemed easier to score, much to the consternation of the ‘Gow faithful.

Chris McGroarty then just failed to cleanly connect with an excellent Felvus cross on 35, but undettered he doubled the Forth advantage a minute later after the ball was well won in midfield by Kris Jarvie who laid it off to McGroarty allowing him to smash the ball past the helpless keeper. Lesmahagow had an opportunity on 41 to pull one back after Gordon Murphy committed a foul on the edge of his own box but the resultant free kick sailed high over the bar and then Chic Clark made another good save just on half time. 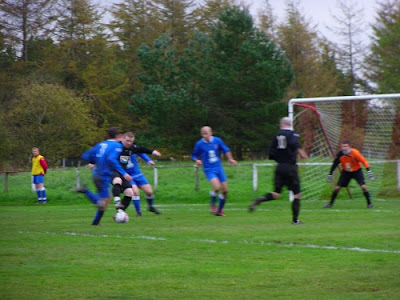 With manager Jamie McKenzie’s half time words ringing in their ears, Forth began the second half purposefully and appeared to have stemmed the Lesmahagow tide although as the half wore on the ‘Gow once again began to dominate. Chic Clark had another important save in the 56th minute before Bryan Felvus could have settled the tie when he broke through and rounded the keeper but the angle was against him and he couldn’t get his shot away. Barry Canning then appeared to be pushed in the box but the referee waved away the Forth penalty appeals. Lesmahagow then got the goal their play deserved when their number 10 smashed the ball past Clark on 67 minutes, setting up a nervous finale for all in the Forth camp. The same ‘Gow player had a chance a minute later but shot over. As the game reached it’s conclusion Forth were defending deeper and deeper as Lesmahagow pushed for an equaliser but despite several close calls some resolute defending saw the Wanderers hold out and progress to the second round.

Overall, Lesmahagow will probably feel they should have won the match due to the number of chances they created but Forth can be proud of a great team effort with everyone digging in as Lesmahagow pushed for an equaliser. We’ve played far better and lost this season that’s for sure, but in Cup matches all that matters is that your name is in the hat come the next round draw.  Objective attained !