Two points dropped at Kingshill Park this afternoon as the Wanderers came from 2 goals down to draw 2-2 with Rossvale. The goals came from a Kris Jarvie penalty and Chris McGroarty. 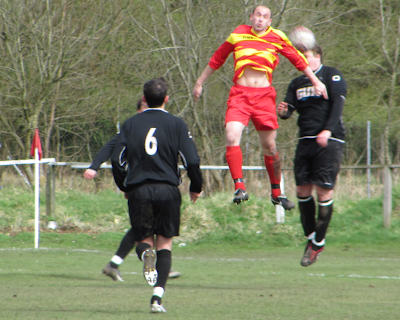 After a slow start to the game, Barry Canning created the first chance when his good run and shot was blocked for a corner. Marc Napier shot over and Gordon Murphy had a free kick comfortably held by the keeper as Rossvale struggled to get out of their own half. Craig Crawford then had a volley blocked by a defender before he sent Barry Canning clear, although the midfielder seemed torn between a shot and a cross and the result was somewhere in between and rolled harmlessly past the post.  Kris Jarvie then sliced wide before forcing the keeper to turn the ball round the post for a corner as another chance went a begging.

As is so often the case in such games, Rossvale broke up the field on the half hour mark and took the lead against the run of play. Their number 11 timed his run from deep perfectly, beating the offside trap,  to run clear and clinically lob the advancing Chic Clark to put the visitors ahead.

Forth then hit the woodwork twice before half-time adding to the growing feeling it wasn’t to be their day. Firstly, a McGroarty free kick was met at the back post by Bryan Felvus who nodded against the post and Paul Gemmell fired the rebound wide. Then, just prior to the interval, a McGroarty header hit the other post, hit the keeper, who knew nothing about it ,and rolled out for a corner. In between these chances, the Rossvale number 10 narrowly failed to get on the end of a dangerous cross from the right and the ‘Vale number 6 was today’s recipient of the weekly “booked for fouling Chris McGroarty” award. 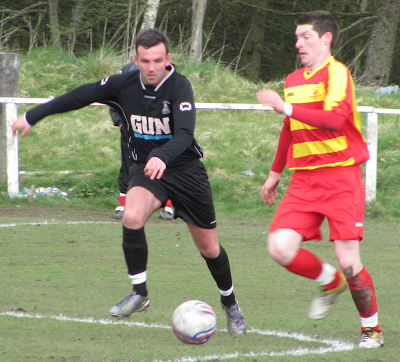 Rossvale started the second half in positive fashion and had the first chance when a headed defensive clearance fell to their number 6 on the edge of the box but he blasted wildly over. Chris McGroarty then had a shot saved and Gordon Murphy’s shot from the rebound looked to be heading into the top corner until a timely block diverted it for a corner. The Wanderers were made to pay when Rossvale doubled their advantage on 54 minutes with the simplest of goals. A long ball out of defence seemed to be misjudged by Lewis McKinlay and although the ‘Vale number 10 mis-hit his shot, he did enough to beat keeper Clark and make it 2-0. 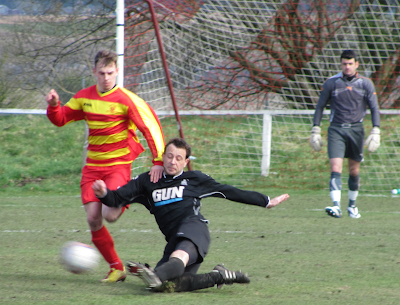 Forth managed to haul themselves back into the game soon after when they were awarded a fortuitous penalty. Gordon Murphy ran into the visitors box and was judged to have been impeded by a Rossvale defender, sparking consternation from the visiting supporters. Unperturbed, KRIS JARVIE, stepped up and drilled the ball into the net to reduce the deficit. The Wanderers sensed an equaliser and poured forward in search of one and it was no real surprise when it arrived on 72 minutes.A perfect Craig Crawford cross from the right was met by CHRIS McGROARTY on the six yard box and his clinical volley gave the keeper no chance.

Forth could now sense victory with almost 20 minutes remaining but despite creating several chances it wasn’t to be. Kenny Wright headed narrowly over, the ‘Vale keeper saved well from Kris Jarvie and a McGroarty diving header was cleared for a corner. The best chance came when another perfect Crawford delivery found Jarvie in space in the box but the striker headed over with the goal at his mercy. He may have been better leaving it for Lewis McKinlay who seemed in a better position directly behind him. During this late pressure the Rossvale number 3 was sent off for two bookable offences, the second when he hauled back Kenny Wright as he raced away. 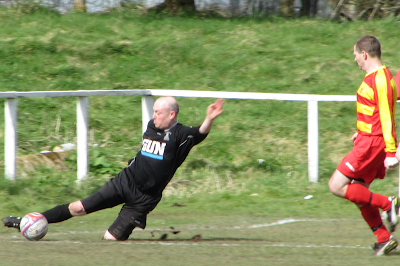 A strangely subdued performance from the Wanderers and it now looks like 3 victories will be required to guarantee promotion. However, I believe we have both the character and the ability to get the points required to achieve our goal.

Next up we have St. Roch’s at Kingshill, which will undoubtedly be another tough encounter.