Two Kris Jarvie penalties won the Wanderers the points at a rain soaked Craighead Park this evening. A further two penalties were missed, one by each side and Lesmahagow also had two men sent off. 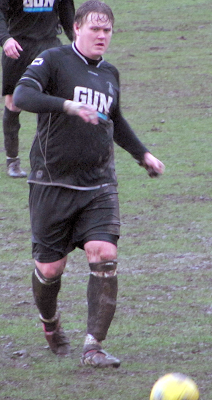 A torrential downpour 15 minutes before kick-off meant heavy underfoot conditions at Craighead Park as these two promotion rivals squared up.

The ‘Gow were first to show when James Whyte shot wide in the first minute while Forth countered with a through ball to Kenny Wright which just eluded the striker and bounced harmlessly into the keepers arms. ‘Gow number 8 Gareth Davies must have thought he’d opened the scoring in the fourth minute when a fine shot looked to have beaten Forth stopper Chic Clark, who was off his line. Clark however, managed to get a hand to it and pull off a tremendous save, a portent of things to come for the home side.

The Wanderers began to play their way into the game and won a couple of corners but these amounted to nothing. Home number 7 James Coffey was proving to be a danger to the Forth defence with his running and movement and Clark had to be alert to tip his fierce shot over the bar on 13 minutes.Coffey was then given a free header at the resulting corner but thankfully for the Forth his effort was high. 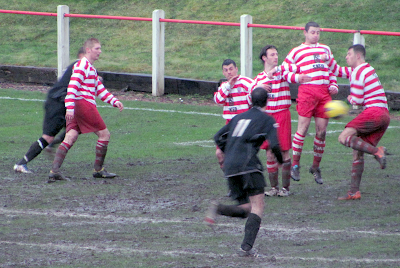 Good play by Kris Jarvie then released Kenny Wright into the home box, where he beat his man and shot but keeper Steven Thomson got down well to block and Barry Canning was unable to net the rebound. The ‘Gow were then given an excellent opportunity to open the scoring on 23 minutes when Nicky Sullivan was adjudged to have been fouled in the box and the referee pointed to the spot.

However, Forth keeper Clark surpassed his earlier efforts with a magnificent one handed save from Colin Boylan to keep the scores level. Forth seemed to take heart from this and forced a series of free kicks around the home box, Kenny Wright coming closest when his effort flew just the wrong side of the post with keeper Thomson struggling.

Another Forth attack resulted in an excellent Gordon Murphy cross being cleared but only as far as Barry Canning whose ferocious shot was blocked by the arm of Nicky Sullivan on the line. A stonewall penalty and a straight red card for the ‘Gow forward.

Chris McGroarty stepped up, but his penalty was well saved by Thomson down to his left.

The Wanderers pushed for an opener prior to half-time against the ten men but an excellent four man move ended with Canning shooting over and no-one was able to capitalise when a 25 yard shot from Paul Gemmell was spilled by Thomson.

Considering the conditions, an entertaining first half for the fans with the ‘Gow starting the stronger and Forth coming more into it as the game wore on. 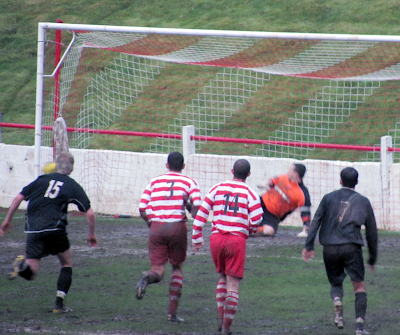 With a one man advantage Forth unsurprisingly started the second half the brighter with Murphy testing keeper Thomson soon after the restart before a Lesmahagow cross was only partially cleared by Clark requiring a Chris McGroarty block on the 6 yard box to prevent a goal from the resultant shot.

On 52 minutes a searing Barry Canning run ended with the referee deciding he’d been fouled in the box and awarding a softish penalty. This time KRIS JARVIE stepped up and finished sweetly high to the keepers right. Undettered, the ‘Gow had a great chance to equalise on 52 minutes when a Forth free kick was blocked by the wall and cleared upfield. There seemed no danger when David Grant elected to play the ball back to keeper Clark but his pass stuck in the mud allowing Liam Fagen to run through on goal unobstructed. Although his shot beat keeper Clark it rolled agonisingly wide of the goal, much to the relief of the travelling support.

The extra man in the energy sapping conditions allowed Forth to now take control of the game and two efforts from Kenny Wright and one from Chris McGroarty were comfortably saved by Thomson. Not to be denied,Wright again broke clear in the box and was hauled down by Barry Murdoch, resulting in another penalty and another straight red card after 71 minutes. Again, KRIS JARVIE converted with the minimum of fuss, this time low to the keepers right, sending Thomson the wrong way in the process. 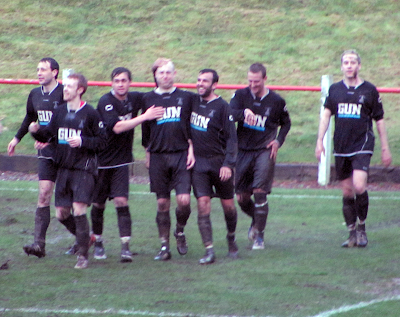 That should’ve been that, but to their credit the 9 men of Lesmahagow kept plugging away and nearly halved the Forth advantage when keeper Clark was dispossessed outside his area but he recovered to save the ensuing shot. Forth had a couple of  opportunities through Wright and Craig Crawford but were unable to capitalise further on their numerical superiority.

There was still time for a moment of controversy however. As a player from each side lay injured in the Forth box with keeper Clark and the referee in attendance the ball broke to a ‘Gow player just over the halfway line. Ignoring shouts to put the ball out, he elected to fire a shot into the unguarded Forth goal as was his right as no whistle had gone.

Unsportsmanlike ?  Yes. Within the letter of the law ? Yes.

The referee chose to see it differently and seemed to award a bounce ball for some reason. Perplexing.

An entertaining game in testing conditions and a great three points for the Forth. As Wanderers manager Jamie McKenzie stated after the match, at this stage of the season it’s the results that matter rather than the “pretty” football.

Thanks to Andy Irvine for the ‘Gow team lines.