A fantastic comeback from 4-1 down saw the Wanderers win 5-4 at Lochburn Park today. The Forth goals were scored by Tony Traynor, David Grant, a Chris McGroarty double and the winner from Kenny Wright.

Unbelievable fightback which puts the Wanderers top of the league for the first time this season. 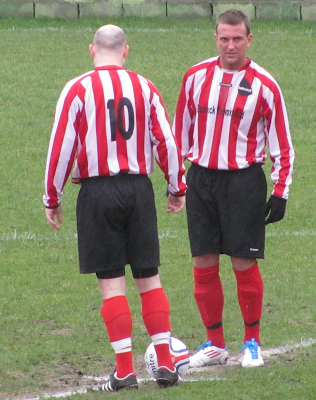 Forth got off to the worst possible start going a goal down within 30 seconds. Jasper Donnelly sprinted down the right wing and crossed and although Lewis McKinlay tried to chest it back to keeper Glenn Weir, Phil Cannie nipped in to score. Weir then had to look lively to touch away a dangerous cross from Paul Gordon as Maryhill tried to double their advantage. The Wanderers began to get into the game and the ‘Hill keeper saved a Tony Traynor shot and a volley from Kenny Wright. 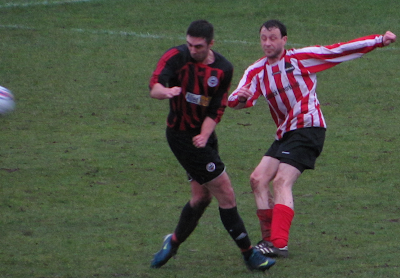 An equaliser was looking likely and it duly arrived on 17 minutes courtesy of Tony Traynor. He received the ball after an excellent thirty yard chest pass by Gordon Murphy and bore down on goal, evading challenges and finishing with aplomb low to the keepers right. Glenn Weir then had to look lively to turn away a Donnelly shot. Forth were now beginning to dominate proceedings, so it came as a surprise when Maryhill regained the lead through Jasper Donnelly. Donnelly, looking suspiciously offside, gathered a through ball and dispatched it with the minimum of fuss to make it 2-1 to the home side. Paul Gordon could have made it 3-1 on the stroke of half-time when he met a corner on the volley but blasted over. 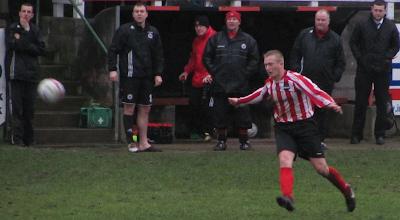 Maryhill came flying out of the blocks in the second half and within 10 minutes had built up what looked like an unassailable 4-1 lead through further goals from Donnelly and Cannie. Forth manager Jamie McKenzie made a triple substitution at this point, bringing on Crawford,Felvus and Stevenson for McKinlay, Murphy and Traynor. This seemed to have the desired effect as Forth visibly upped their game and only a good save from ‘Hill keeper Shepherd denied Barry Canning. The Wanderers efforts were rewarded though when Chris McGroarty curled a peach in from 20 yards to make it 4-2. With just under half an hour remaining Forth still had time to mount a comeback although this was aided by Maryhill’s decision to replace striker Cannie with a defender in order to try and shut up shop. This tactical change allowed Forth to go for the jugular and it was no surprise when David Grant popped up to make it 4-3, forcing the ball home through a ruck of players after his initial header was blocked. 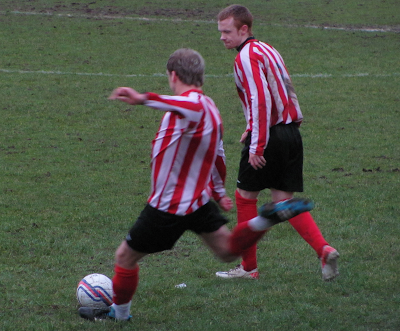 Forth were now pressing strongly for an equaliser and were rewarded in the last minute of normal time when Chris McGroarty struck from fully 25 yards, his shot thundering in past the keeper just under the bar. With the bit now firmly between their teeth, Forth continued to attack, not happy to settle for a draw and Kenny Wright capped a superb fightback with an injury time winner. There seemed little danger when he picked up the ball wide but he cut inside and unleashed an unstoppable shot past keeper Shepherd, sparking massive celebrations on the pitch and amongst the travelling support.

Skipper David Grant believes the team “showed great character” and “always knew we could get back in it” while manager Jamie McKenzie heaped praise on his captain saying “he grabbed us by the scruff of the neck and got us back into the game” and “it’s probably the best game he’s played for us.” The manager also commented that he’d told his players that “to win leagues, we have to come to places like this and win” and also mentioned that it was “probably the best win as a manager I’ve ever been involved in.”

Chris McGroarty believes the victory was “definitely fully deserved” and spoke of the team’s “massive belief” that they could mount a comeback , even at 4-1. He also spoke of his “wonder strike” for the fourth goal from “fully 40 yards” although his tongue was firmly in his cheek at this point. At least I think it was … 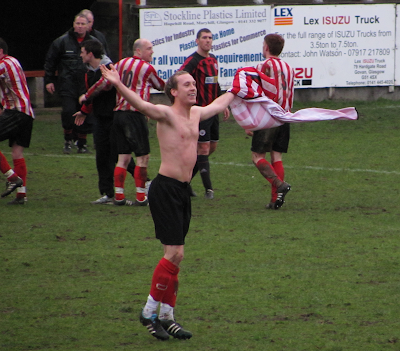