A Gordon Murphy brace and a single from Kris Jarvie gave the Wanderers all three points against Royal Albert at a snowy Kingshill Park this afternoon. Forth played some excellent passing football despite the conditions and fully deserved the victory against a lacklustre Albert, who failed to build on their win at Maryhill last week. 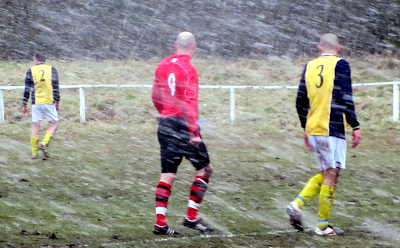 From the outset, the Albert gameplan seemed to be to keep it tight at the back and hit Forth on the break, but as the game progressed the Wanderers began to create chances. After a good four man passing move, Kris Jarvie challenged for the ball with the keeper and went down, but despite muted appeals for a penalty the referee waved play on. Tony Traynor was then brought down 20 yards out but the resultant Chris McGroarty free kick was easily saved by the visiting keeper. The impressive Gordon Murphy then threaded through an excellent ball for Kenny Wright to run on to but the keeper did well to rush out and block at the expense of a corner. 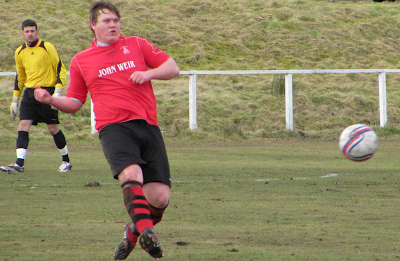 Royal Albert were rarely seen as an attacking threat, although they were trying to get last weeks hat-trick hero McGill on the ball whenever possible, but he was being well marshalled by the Forth defence. Forth then almost took the lead through an unlikely source when David Grant hit a shot from just inside the box which evaded the keeper, hit the inside of the left post and rolled along the line before being cleared. The snow was by now coming down, making conditions difficult, but Forth kept looking for the elusive opener and McGroarty fired a shot wide with the keeper struggling before Jarvie shot straight at the keeper.

As half time approached Forth eventually made the breakthrough when the Albert keeper flapped at a cross and the ball fell kindly to Gordon Murphy who made no mistake from 12 yards. 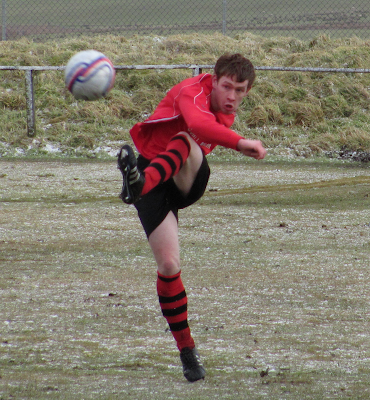 Murphy then made it 2-0 early in the second half when a superb Barry Canning pass found him wide on the right and his sweetly hit half-volley beat the keeper at his near post, although the keeper will feel he should have done better. The Albert then launched a rare attack which ended when striker McGill looked to be fouled in the box, but instead of awarding a penalty, the referee booked the Albert man for diving. A great Murphy pass then found Barry Canning whose netbound shot was well saved by the Albert custodian and he followed this up with a near post save from Kenny Wright. 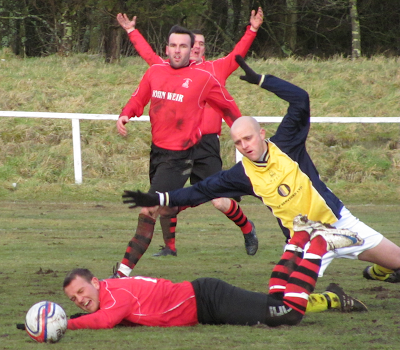 The third Forth goal duly arrived when another pinpoint Murphy cross was despatched past the keeper by the head of Kris Jarvie, for his fourth goal in the last two games. The Wanderers then had the opportunity to go further ahead when a great run and pass from Barry Canning found Kenny Wright just inside the box and as he turned he was upended for a stonewall penalty. Wright took the kick himself but blasted the ball high over the bar. Royal Albert,to their credit, kept plugging away,but their sporadic attacks were expertly dealt with by the Wanderers defence.

Substitute Martin Harty then carved out a great chance for himself when he cut through the Albert rearguard but he elected to pass rather than shoot and the ball was cleared for a corner. From the resultant corner, a Gemmell header was easily saved by the keeper. Chris McGroarty had one final chance for the Wanderers, but after a good run he shot narrowly past with the keeper beaten. 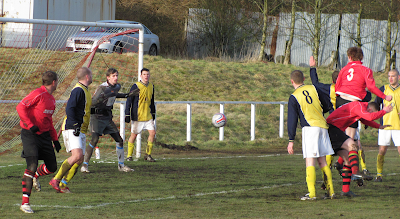 Another professional performance from the Forth in a match many had down as a potential banana skin considering the Albert’s victory at Maryhill last weekend. The Wanderers played some excellent passing football throughout which augurs well for next weeks match with Maryhill, assuming, of course, Lochburn Park is playable.