Forth were well beaten by Shotts tonight at an extremely wet Hannah Park.

Shotts, apparently without several first team regulars, were the better team throughout although the Wanderers had some decent periods of play especially in the first half. 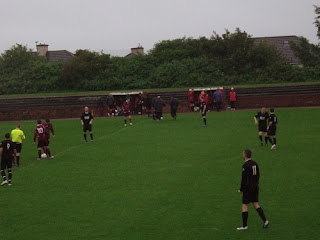 From the start Shotts made good use of the expanse of Hannah Park and Forth had trouble throughout the game dealing with the pace down both wings. Although Forth had some decent possession they were unable to create any clear cut chances within the final third in the early part of the first half.

After some sustained pressure, including several corner kicks, Shotts finally made the breakthrough when their number 9, who was a threat throughout the match, stroked home from a cross 10 minutes from the interval. Two minutes later however, Forth were level after Kris Jarvie turned in an excellent left wing cross from Gordon Murphy. This goal was somewhat contrversial as the stand side linesman initially raised his flag for offside before putting it down and allowing the attack to continue.

Just as it looked as if the Wanderers would go in level at half time, Shotts were awarded a penalty when Lewis McKinlay handled after appearing to slip as a result of the wet underfoot conditions. The Shotts number 7 made no mistake from the spot.

Shotts continued to dominate in the second half and increased their lead after goalkeeper Clark blocked a free kick from the edge of the box only for the Shotts number 9 to follow up and score.The scoring was completed by Shotts substitute number 16.

On a sour note, one Shotts player was carried off on a stretcher after a seemingly innocuous foul and an ambulance was waiting at the end of the game. Here’s hoping he makes a full recovery.

Next up the ‘Candy Rock’ away in the first match of the league campaign.