Forth got their season up and running today with a tremendous nine goal victory in Stonehouse. Goals and the rub of the green had been hard to come by in the first two league matches but this was a completely different story. Despite missing three first team regulars the Wanderers went for the jugular from the off and were rewarded within 5 minutes when Kenny Wright cooly despatched a through ball past the keeper. Stonehouse fought their way back into the game and it took a couple of fine saves from Forth keeper Chic Clark to maintain the advantage. Gordon Murphy looked to have made it two on the half hour with a spectacular 25 yard shot but it was inexplicably ruled out by the referee. Forth were not to be denied however and a Felvus chance was turned into his own net by a Violet defender whilst trying to clear. Just before the interval, Kenny Wright burst through on goal, slid the ball past the keeper and was brought down. Red card and penalty to the Forth. Wright made no mistake from the spot. Tony Traynor sealed an excellent first half performance from Forth with a goal just prior to the break.  HT 4-0.

The talk at half time was whether Forth would take their foot off the gas in the second half but those thoughts were dispelled early on when a neat move left Tony Traynor with a tap in for the fifth. Kenny Wright then secured his hat trick with a sixth before a shot cannoned off the post and back off the keepers head and into the net for the seventh on 65. There was no let up from the Wanderers as they attacked relentlessly and it was no surprise when substitute Kris Jarvie notched the eighth on 70 minutes. The scoring was completed on 75 minutes when Bryan Felvus got his name on the scoresheet to cap a promising debut. Despite numerous other chances double figures were to elude the Wanderers but at the end no-one was complaining. 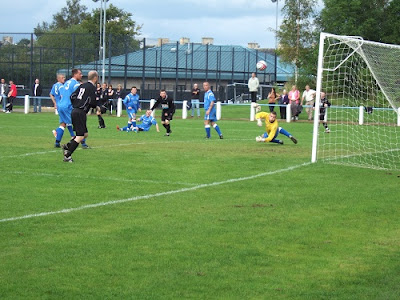 Fair play to a well beaten Violet side who never resorted to rough house tactics as the score mounted. Overall a cracking display which gives us the best goal difference in the league and augurs well for what should be a cracker against Blantyre Vics next week.

Jamie and the lads – that was superb, you’ve set the standard now let’s maintain it !