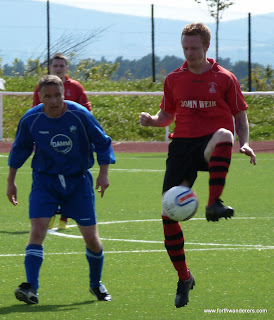 The first chance of the match fell to Forth when the home keeper got down well to a 20 yard shot from Chris McGroarty and pushed it away for a corner. Gordon Murphy then connected with a Jamie McKenzie free kick but headed wide of the post. Wanderers keeper Hutchison then had to look lively to turn a well hit shot around for a corner.

Forth took the lead on the half hour when a tremendous shot from Gordon Murphy was blocked by the Rovers keeper McLachlan only to fall to the trialist striker who was bundled to the ground before he could net. The referee had no hesitation in pointing to the spot and Jamie McKenzie made no mistake with the penalty.

Jackson then unleashed a vicious shot which Forth keeper Hutchison did well to turn away for a corner as the home side tried to get back on level terms. The same player then shot narrowly over before ex Forth striker Kenny Wright equalised on 44 minutes although there was a suspicion of handball as he ran through.

Forth began the second period brightly and Gordon Murphy volleyed wide on 48 minutes before Hutchison in the Forth goal was called upon to touch over a shot from Weir on 52 minutes. The Wanderers regained the lead when a fantastic Murphy cross field ball found the trialist striker running clear and he buried his shot with aplomb. Carluke then had a penalty shout denied before Weir shot narrowly wide. The Wanderers were next to threaten when a McGroarty shot was blocked before Carluke’s Arnott headed over from a corner. Weir was next to threaten for the home side when he latched onto a cross at the back post but drove the ball into the side netting.

Forth continued to press, not content to sit on their lead, and a smart one two between the trialist striker and McGroarty led to the latter’s shot being saved by McLachlan but the ball fell to Bryan Felvus who smashed an unstoppable shot into the net from 22 yards to make it 3-1. The Wanderers comfortably played out the remaining 20 minutes to record a well deserved victory.