Forth welcomed back striker Kenny Wright, making his second debut, in place of the injured Martin Harty while Stephen McQuade and Gordon Murphy came in for Craig Crawford and Chris McQuade. 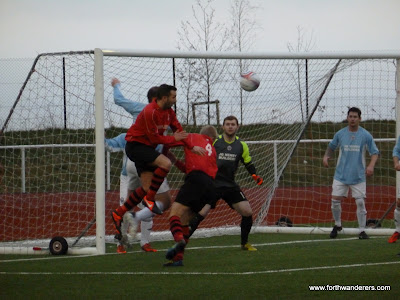 Maryhill, with the wind at their backs in the first half, started in a determined manner and fashioned several attacks in the opening 5 minutes. Forth created their first chance on 6 minutes when a Jamie McKenzie free kick found Gordon Murphy in the box, but his shot was deflected for a corner. The ‘Hill continued to cause the Forth defence problems with their high tempo attacks and David Grant did well to deflect a netbound shot for a corner on 8 minutes. Maryhill then created a further couple of chances but on both occasions shot wide from good positions.

The Wanderers responded when good work from Kenny Wright and Jamie McKenzie released Marc Howson on the right and he beat his man and fired in a dangerous cross which was cleared for a corner. The corner was played to Jamie McKenzie on the edge  of the box but he was fouled before getting his shot away. From the resultant free kick, Chris McGroarty brought out a smart save from the visiting keeper.

Maryhill continued to attack at every opportunity and took the lead on 21 minutes when a cross from the right was expertly dispatched by Alan Murray at the near post. The visitors had the opportunity to extend their lead a mere four minutes later when awarded a penalty after a rash David Grant challenge. Ryan Scobie took the kick but JC Hutchison in the Forth goal was equal to it, diving to his right to make a tremendous save. However, Scobie was not to be denied and popped up after 29 minutes to neatly finish a cross from the right to make it 2-0. To make matters worse for the Wanderers, Scobie broke through a minute from the interval and finished well past Hutchison to make it 3-0 at the break. 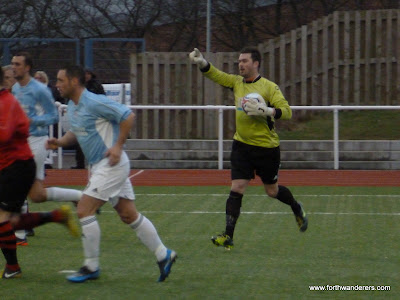 Jamie McKenzie brought out a save from the ‘Hill keeper as Forth began the second half looking to reduce the deficit but the visitors were soon on the offensive and Forth keeper Hutchison had to look lively on several occasions keep the score at 3-0. The Wanderers brought on all three substitutes in an attempt to get back into the game and as the second half progressed began to exert some pressure of their own.

Craig Crawford went close with a shot before a perfectly flighted McKenzie free kick picked out Kenny Wright in the box, but the striker headed over with the goal at his mercy. Barry Canning then headed over from a Wright cross and Chris Gordon also fired narrowly wide. Maryhill continued to look dangerous whenever they attacked but despite the best efforts of both sides the score remained 3-0 at the finish.

A proverbial bad day at the office for the Wanderers against an impressive Maryhill side. We’ll dust ourselves down, move on and look forward to what should be another tough encounter with Johnstone Burgh next week.