Forth went down by three goals to one against Shotts at Kingshill Park tonight, but a gutsy performance against the Junior Cup holders, who are three divisions above the Wanderers, augurs well for the forthcoming season.

Forth held a one goal lead at the interval through a trialist striker, who netted in his second consecutive game, but a second half onslaught from the visitors proved just too much for a determined Wanderers rearguard well marshaled by manager Jamie McKenzie. 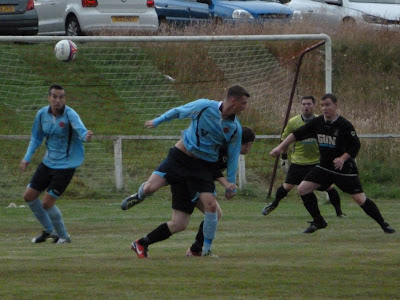 The Wanderers welcomed back captain David Grant, who was deployed in a midfield role, and Tony Traynor but were missing Gordon Murphy and Bryan Felvus from the team which started on Saturday.

Chris McGroarty had an early drive blocked for Forth before Tony Jaconelli had the ball in the next for the visitors only to be given offside. On 12 minutes the Wanderers took the lead when a long ball from Hutchison deceived the Shotts defence and the trialist striker stole in behind them and neatly lobbed the advancing keeper. Tony Traynor was next to have a go but his shot ended well wide. Hutchison then saved comfortably from a Goodall free kick as Shotts began to press and striker Allan McKenzie was unlucky to see his shot slip narrowly wide.  Hutchison then saved well at the feet of Allan McKenzie before turning away a rasping drive from Paul Finnigan for a corner. The Forth keeper then saved from Shotts substitute Gary Millar just before the interval as the Wanderers held on to their slender one goal advantage. 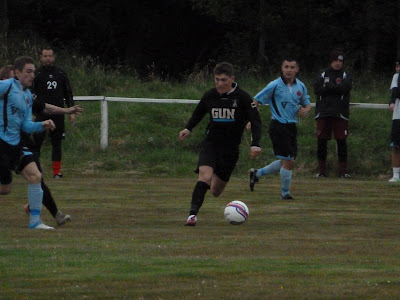 Forth began the second half brightly and Barry Canning made a good run before eventually being crowded out and then Shotts substitute Paul Burns passed back to his keeper who had to pick it up under pressure from Chris McGroarty. The resulting free kick was fired wide by Jamie McKenzie.

Shotts then began to dominate, forcing the Wanderers back deep into their own half, but resolute defending and inspired goalkeeping from Hutchison kept them at bay. Gary Millar was prominent for Shotts and was causing the home defence problems. The visitors then had a goal disallowed for offside after a superb shot smashed against the bar, Hutchison parried the rebound and the ball was forced home.

Shotts then won a series of free kicks on the edge of the Forth box and it was from these that they made the breakthrough. The first was well saved by Hutchison but the next,although initially well saved, came back out to Allan McKenzie who made no mistake from close range. Worse was to follow two minutes later when another free kick on the edge of the box was rifled home by Scott giving Hutchison no chance. Forth tried to get back into it but the visitors sealed the win when an Allan McKenzie cross was well controlled and expertly dispatched by Tony Jaconelli in the closing minutes.

Overall, on the evidence of the last two matches there is much to be optimistic about down Kingshill Park way, but on the night Shotts were deserved winners although the Wanderers can hold their heads high.