Forth lost 3-2 to Wishaw tonight at a rainy Kingshill Park. The Wanderers goals were scored by the trialist number 10 and Marc Storrie.

The Forth cause wasn’t helped when Martin Harty saw red after 9 minutes for what was deemed to be a last man foul. To rub salt in the Wanderers wounds Wishaw scored from the resulting free kick after Hutchison had saved the initial effort. Barry Canning was also sent off late on to cap a disappointing night for the Forth.

Forth were without central defensive partnership Jamie McKenzie and Scott Gibb as well as the unavailable Gordon Murphy and the injured Bryan Felvus.

The first chance of the match fell to Wishaw after 2 minutes when Faulds beat the Forth offside trap and his cross from the right was just missed by onrushing strike partner Main. Chris McGroarty was first to threaten for Forth but his 20 yard strike flew over the bar. Then, on 9 minutes, a pivotal incident in the game. A long ball over the top of the Forth defence was chased by the visitors Main and Martin Harty and after a tangle at the edge of the box a free kick was awarded to Wishaw and Harty given his marching orders. A sense of deja vu descended on the Forth support as Shotts scored two from virtually the same position on Monday night and, sure enough, although Hutchison blocked the initial shot Jamie Main was on hand to sweep home the rebound.

The Wanderers could have gone further behind on 19 minutes when a long ball forced keeper Hutchison into a headed clearance just outside his box which fell to the lively Faulds, whose accurate lob hit both posts before being smothered by a relieved Hutchison. The ten men of Forth were beginning to pass the ball around well and were coming much more into the game and it was no surprise when they equalised. A good run from Tony Traynor ended him passing to the trialist number 10 inside the box and he swivelled and shot into the right hand corner of the net giving the keeper no chance. A McGroarty cross forced a defender to head over his own bar and Storrie put a chance by the post as the Wanderers sought to gain the advantage. The Wishaw keeper comfortably held a header from the Forth goalscorer before just beating Tony Traynor to an excellent cross from the right. At the other end home keeper Hutchison stood up well to make an excellent save as Wishaw threatened. The final chance of the half fell to Wishaw’s Faulds but he fired over. 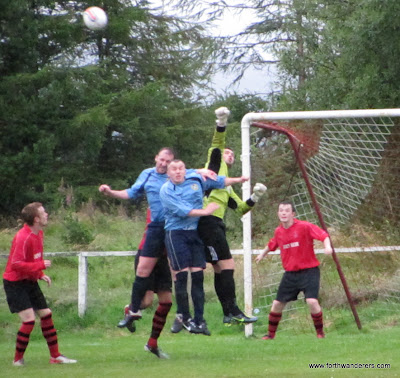 Wishaw regained the advantage two minutes after the break after some hesitant defending allowed Jason Lafferty to nip in and slip the ball past Hutchison from around 10 yards. Storrie had a shot deflected for a corner after 56 minutes and five minutes later the trialist number 10 dragged his shot wide from a promising position. The latter almost scored his second of the game but the visiting keeper did well to rush from his line and effect the block. Wishaw were still threatening on the break and Hutchison did well to clear the ball off the foot of the threatening Faulds. McGroarty then forced the visiting keeper into a fine save from a well taken free kick before he again made space for himself and shot narrowly over.

Time was running out for the Wanderers and with four minutes to go things got worse when Barry Canning was sent off for his second bookable offence. Wishaw then sealed the win when Eddie McCardle drifted in to meet a cross from the right and head neatly into the net to make it 3-1. Almost immediately Storrie pulled a goal back for the Wanderers despite the suspicion of offside and there was one final chance for Forth but the trialist substitute dragged the ball wide.

Overall, a disappointing result, but on a positive note several trialists had a decent run out ahead of the league season starting and the squad as a whole is beginning to take shape.