The Wanderers lost an entertaining Clydesdale Cup match to Lanark by 5 goals to 3 tonight at a sunny Kingshill Park. The Forth goals came courtesy of David Grant, a Jamie McKenzie penalty and Bryan Felvus. 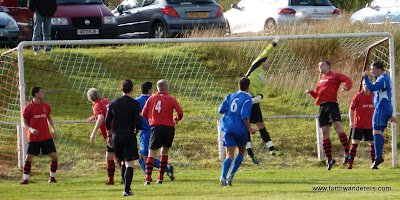 Forth created the first chance within 4 minutes when a ball through to Bryan Felvus beat the visitors offside trap but the Yowes keeper did well to turn the sweetly hit shot over for a corner. A minute later a mishit Felvus shot had the keeper scrambling across his goal and happy to see it go just the wrong side of the post.
New Forth keeper JC Hutchison then produced an excellent save to keep the scores level. An inviting cross from the left was met by a Lanark head and the ball looked to be heading into the top corner until the keeper managed to get a hand to the ball and turn it away for a corner. Lanark came even closer after a slack back pass from Gordon Murphy eluded the keeper and slid just the wrong side of the post. The Yowes were having a good spell at this point and a long ball over the top left their centre forward one on one with the keeper but again Hutchison produced a tremendous save, staying on his feet as long as possible and not giving the striker an easy option. 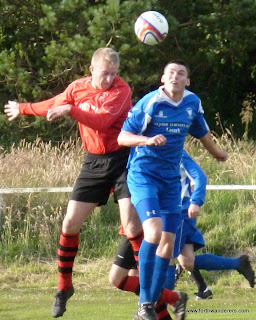 Forth came roaring back into the game and took the lead on 19 minutes. Jamie McKenzie whizzed a dead ball in from the left eluding everyone apart from David Grant at the back post who finished neatly despite a valiant effort by a defender on the goal line. Just before the half hour, Hutchison again had to look lively to turn away a dangerous free kick from the Lanark number three at the expense of a corner.
Forth extended their lead on 41 minutes after a Bryan Felvus header sent Barry Canning racing into the box where he was clearly brought down. Manager Jamie McKenzie chipped in the resultant penalty to give the Wanderers a precious two goal advantage. A moment of controversy followed as the Lanark keeper appeared to thwart a Forth attack with a hand outside the box although the referee adjudged it to have been his chest and waved play on. Lanark took full advantage and raced up the field to level after a quick break left their forward clean through on the keeper and he made no mistake.
Forth began the second half on the front foot, the Lanark keeper having to look lively to turn over a Chris McGroarty free kick before a Bryan Felvus cross found Tony Traynor and his goal bound header was cleared for a corner. The Yowes keeper, who had a decent game throughout, was then forced to turn a dipping Chris McGroarty shot, which was heading just under the bar, over for another Forth corner. Bryan Felvus then went close with a volley from the edge of the six yard box which flashed narrowly wide. 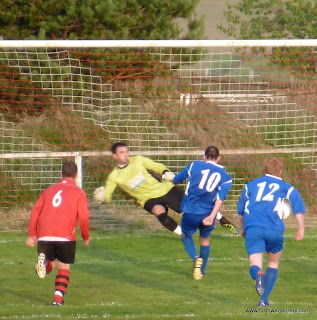 Lanark had never been out the game however and a cross from the left was met by a forward only to be well saved by Forth keeper Hutchison, although it fell kindly to another Lanark player who took full advantage to level the scores. Lanark then took the lead on 72 minutes when a long ball was adjudged to have beaten the Forth offside trap, despite vehement protests from the Wanderers defenders, and the on rushing forward was brought down. Marriot made no mistake from the spot to put the visitors ahead. Forth didn’t let the heads go down though and achieved parity when an excellent corner from the trialist substitute was hammered home by Bryan Felvus on the 6 yard box.
As thoughts in the crowd may have been drifting towards penalties, Lanark had other ideas and regained the lead when a pacy free kick by Rankin seemed to be missed by everyone before taking an awkward bounce past Hutchison. The icing on the cake for Lanark came when their trialist striker neatly finished after Hutchison had made another good block from the initial attempt.
Overall, a far better performance from Forth than the one on Saturday in a game where they gave as good as they got against their higher league opponents.
More photos can be found here.
‘Mon the Forth