The Wanderers won 3-0 against Newmains at Kingshill Park this afternoon thanks to goals from Jamie McKenzie and a Martin Harty double. Newmains cause wasn’t helped when their keeper was red carded when giving away the penalty which led to the Wanderers opener. Forth could have scored more in the second half but Newmains substitute goalkeeper was in fine form.

The visitors had the first chance of the match, flashing a header wide with only two minutes on the clock and the early exchanges suggested that they would be a much tougher proposition than the team Forth faced on Monday night. The Wanderers first real opportunity came after 15 minutes when Tony Traynor ran through and played in Martin Harty but the striker dragged his shot wide. Jamie McKenzie was next to show for Forth evading his man in the box but again he fired wide.

Forth were awarded  a penalty on 23 minutes when a Howson cross was headed into the path of Martin Harty by Gordon Murphy and the striker took a touch, rounded the keeper and was felled by the stopper who received a red card for his trouble. After a delay of a couple of minutes, Jamie McKenzie stepped up and dispatched the ball into the net with the minimum of fuss. 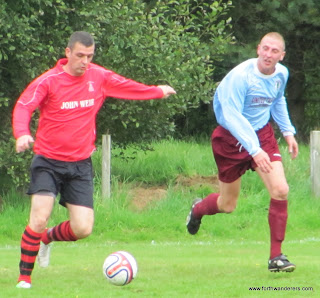 Newmains had a chance to level when Martin Daly controlled the ball well and ran clear of the Forth defence but his chipped shot just cleared the crossbar. On 35 minutes the Wanderers almost increased their lead when a great ball from McKenzie found David Grant in the box but his header came back of the keepers left hand post and was cleared. Undeterred, Forth doubled their lead soon after when Gibb found McKenzie who then threaded a perfectly weighted ball to Martin Harty who beat the keeper with ease. The Wanderers had further chances through Marc Howson,Chris McGroarty and Gordon Murphy but at the interval the score remained 2-0.

The visitors began the second half brightly and had a couple of chances in the opening minutes but one failed to hit the target and the other was comfortably saved by Hutchison in the Forth goal. As Newmains pushed up they were leaving gaps at the back and first Murphy then McKenzie went close for the Wanderers. The visiting keeper then saved well when Harty was through on goal and made another excellent block from Traynor as Forth attempted to kill the game off. The keeper made further good saves from Harty and McKenzie before saving well from Howson. It was all Forth at this stage but they were unable to turn the relentless pressure into goals. However on 83 minutes the Newmains resistance was finally broken. Good interplay between the two trialist substitutes resulted in a cross come shot being turned over the line by Harty to make it three and complete the scoring.

A comfortable win for the Wanderers in the end, helped in no small part, by Newmains going down to 10 men early in the match and although Forth really should have scored a few more, it was still 3 points and a clean sheet. 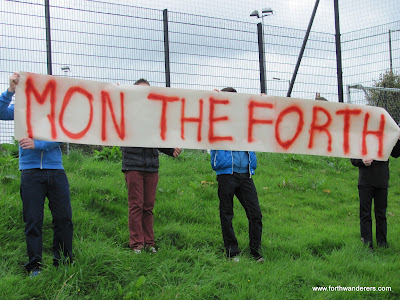 A final word concerning the Forth ‘ultras’ whose banner,songs and support throughout the game was much appreciated. I believe they plan to be regular attendees and I’m looking forward to seeing how they develop.

Small acorns and all that …