A late goal saw the Wanderers go down to a narrow 2-1 defeat against Livingston United at Station Park this afternoon. Bryan Felvus netted the Forth goal, his third in three games. 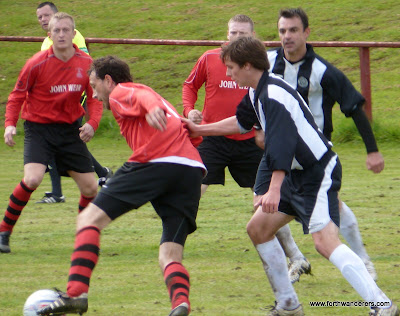 Chances were few and far between in a first half where the weather fluctuated between sun and driving rain. The Wanderers best chance fell to Bryan Felvus who latched on to a Chris McGroarty free kick but the home keeper blocked his shot with his legs. For Livi, their number 10 was prominent and had a couple of chances both of which he put wide. Their best chance came on the stroke of half-time when a cross into the six yard box looked sure to be converted by their striker but somehow he contrived to miss and the ball was scrambled clear.

Forth began the second half brightly and a Chris McGroarty corner found Barry Canning free just outside the box but he fired well wide. However, it was Livingston who broke the deadlock when a perfectly flighted free kick from the left was met by Jaconelli who gave Hutchison in the Forth goal no chance.

This seemed to spur the Wanderers into action and they proceeded to have their best spell of the match. A fantastic crossfield ball from Martin Harty found Bryan Felvus in the box and his header beat the keeper but was unfortunately just wide of the left hand post. Undaunted, Forth levelled when a powerful Gordon Murphy shot was parried by the home keeper and Bryan Felvus was on hand to net from a couple of yards.

Barry Canning them came close to giving the Wanderers the lead after a strong run, but his shot was blocked by the keepers legs. The keeper then did well to block a close range Chris McGroarty header as Forth stepped up a gear.

It was the home side however who scored what proved to be the winner, when a free kick in front of the home dugout fully 35 yards out was powerfully struck by Wilson and somehow found it’s way into the top of the Forth net.

Another good work out for the Wanderers with promising displays from the three trialists, especially the number 4.

More photos from the game can be found here.