Forth won 4-1 at Victoria Park tonight against Newmains United, the goals coming from a trialist, Tony Traynor and a Jamie McKenzie brace. 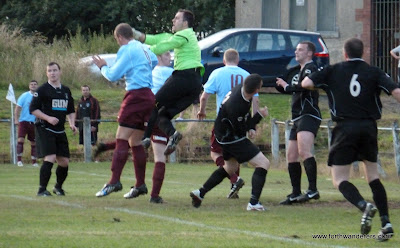 Forth welcomed back manager Jamie McKenzie for this match which only the Wanderers appeared to realise was a 6:30 kick off. Newmains seemed to think it was 6:45 and after some discussion the game finally got underway at 6:42.

Forth began the game purposefully and found themselves two goals up within 13 minutes. The opener arrived in the second minute when a short McGroarty corner found Howson in space and his pinpoint cross was headed neatly home by the trialist number 10. Two minutes later McKenzie fired a free kick over as the Wanderers continued their early domination. The lead was doubled on 13 minutes when some neat interplay on the right saw Storrie make for the bye line and his cut back was coolly finished by Tony Traynor.

Forth were passing the ball about well at this point and on 26 minutes a good Harty run found Storrie who hit his shot across the keeper,but the stopper did well to palm away at full stretch. Harty was again involved playing a neat 1-2 with Howson but the danger was cleared.Jamie McKenzie was next to threaten latching on to a McGroarty corner but his shot was easily saved by the home keeper.

Up to this point, Newmains hadn’t been seen as an attacking threat but this changed when their number 10 fired over after a smart turn and shot.Glenn Weir in the Forth goal was then called into action, punching clear an inviting cross through a crowd of bodies as the home side began to gain in confidence. Forth were never under any real pressure however and saw the game out to half time with their two goal advantage intact.

Forth made it three early in the second half after the referee adjudged a foul had been committed on the far side of the area. Jamie McKenzie made no mistake from the spot. Minutes later Newmains had a penalty of their own after their striker was brought down although they subsequently put the ball in the net after the whistle was blown. They were made to rue the lack of advantage played when Weir got down well to his left and saved the penalty taken by the hosts number 5. However, the home side did get back into the game with a well taken goal from their number 6 who gave Weir no chance from around 22 yards. This seemed to instill confidence in the home side, but a straight red card on 69 minutes for their number 3 put paid to any hopes of a fightback.

Forth had several further chances as the match wore on but managed only one further goal, although Storrie was unlucky on a couple of occasions. The goal came when Storrie latched on to a through ball and fired it across goal where McKenzie had the simplest of tasks to tap in from a yard.

A good victory for the Wanderers considering the ‘dead-rubber’ status of the match, hopefully a similar result can be achieved when the teams resume hostilities at Kingshill Park on Saturday.

Further photos can be found here.