Forth slumped to their first league defeat of the season at Petershill Park yesterday, Rossvale emerging victorious by one goal to nil. Although the Wanderers enjoyed the majority of the possession, Rossvale had the better chances, striking the woodwork on two separate occasions.

After an uneventful opening 10 minutes, Forth created the first opening when a Marc Howson throw found Martin Harty inside the box and his cross was met by the head of Gordon Murphy but his header flew over. Rossvale then went close when their number 9 cleverly made space for himself before unleashing a tremendous shot which rattled the Forth post with keeper Glenn Weir beaten. Tony Traynor then burst through the home defence but his shot was inches too high. Chances were at a premium in what was becoming a tight game and although the Wanderers had plenty of possession, they weren’t troubling the home keeper. It was no surprise that the game remained scoreless at the interval. 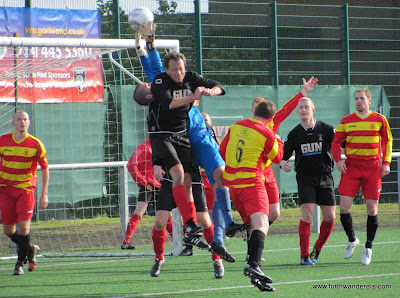 Rossvale began the second half brightly and hit the crossbar soon after the restart before Forth keeper Weir spread himself well to block a shot from the ‘Vale number 11 who found himself with a clear run on goal. Similar to the first half, Forth had the majority of the possession but Rossvale always looked dangerous on the break. And it was the home side who took the lead in bizarre circumstances. Forth were playing the ball out from the back when a misplaced pass allowed a Rossvale forward the opportunity to strike for goal and although the initial shot seemed to be going well wide, David Grant’s attempted block deflected the ball wickedly and it found it’s way into the Forth net. The Wanderers used all three substitutes in an attempt to level things up, but a Craig Crawford free kick which skimmed the top of the bar was the closest they came to equalising.

Overall, a bad day at the office for the Wanderers, who despite dominating possession, rarely troubled the home keeper.

Further photos from the game can be found here.