The Wanderers drew 2-2 with Royal Albert at Gasworks Park tonight, after fighting back from two goals down. The Forth goals were scored by Gordon Murphy and Jamie McKenzie. 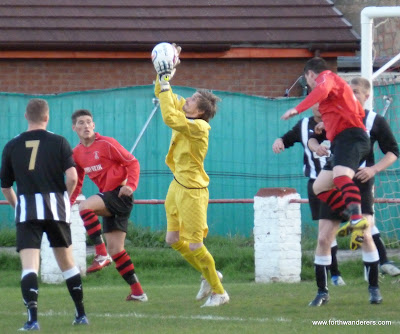 A proverbial game of two halves at Gasworks Park with the Albert having the better of the first half and creating the better chances and Forth dominating the second against a ten man rearguard action.
The initial minutes saw the ball swing from end to end as both sides went in search of an early opener but it was the home side who took the lead on 5 minutes with a sweet 20 yard strike from James Nelson. The ball was played into the Wanderers box and Jamie McKenzie appeared to be impeded as he cleared but the ball fell to Nelson who wasted no time in dispatching past the despairing Weir in the Forth goal.
The Wanderers retaliated with a McGroarty shot which flew narrowly past the post with the home keeper Craig Smith scrambling to his right. A quick McKenzie free kick then found Harty but Smith blocked his shot and Storrie was unable to divert the rebound on target.
Royal Albert doubled their lead with barely 12 minutes on the clock, when Weir misjudged a tame Nelson shot, the ball going through the distraught keepers legs and into the net. Jamie McKenzie was beginning to pull the strings for the Wanderers and a great ball from him saw Murphy flash a shot wide with Smith beaten. Marc Storrie then had a shot saved before a Murphy cross just eluded McGroarty in the Albert box.
The home side were giving as good as they got though and nearly increased their lead when a deflected shot was headed off the line for a corner by McKenzie. The corner caused further problems for the Forth defence before being cleared as did a subsequent long throw. The Albert created another chance when a corner was dummied
to leave a strike at goal, but the subsequent shot was miscued in the box when a cleaner connection would surely have resulted in a goal. The home side came close again when a deflected shot went just narrowly wide.
Forth were never out of it though and after Storrie had volleyed over he played a fine pass to Gordon Murphy on the left hand edge of the box and his pile driver gave Smith no chance, to reduce the deficit on 41 minutes. Things went from bad to worse for Royal Albert when Craig Cooper was red-carded for what the referee signalled as a stamp although it looked little more than handbags to the fans in the enclosure. 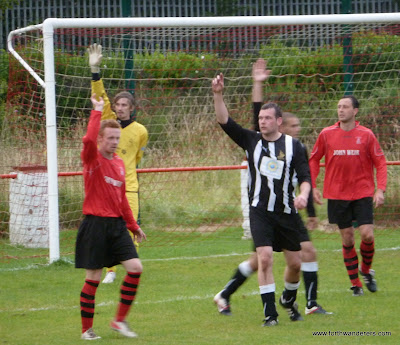 The Wanderers began the second half in determined mood as they set about levelling the contest. Tony Traynor had a shot deflected for a corner before home keeper Smith excelled himself with tremendous close range stops from Traynor and Gordon Murphy. Albert scorer Nelson was on a hat-trick and his free kick from wide on the left flashed across the goal and wide to the relief of the Forth defence. This was a brief respite for Albert who were being increasingly pinned back by waves of Wanderers attacks.
Jamie McKenzie went close but his shot was touched away for a corner by keeper Smith. The Forth manager was not to be denied however and he duly notched the equaliser in the 70th minute. Marc Storrie produced an excellent deep cross from the left which took out the home defence and McKenzie nodded home from 5 yards.
Forth now had the bit between their teeth and Harty came close after Smith spilled a vicious McGroarty shot before Storrie shot wide and Murphy narrowly over. As we entered the last ten minutes a great run from substitute Craig Crawford saw him round the keeper but he shot wide from a narrowing angle. Storrie then thought he had won it for Forth with a fierce drive but Smith again got down quickly to his left to make an excellent save. Despite further chances for Harty and McKenzie the elusive winner would not come and the honours ended even.
Albert player/coach Jamie Nesbitt was kind enough to provide a home perspective on the match saying “I thought we played some very good football up until the sending off. We just couldn’t find the third goal. Forth battled well and used the extra man to their advantage in the second half. Our keeper was outstanding when called upon with a double save, so I suppose a point apiece was a fair result.”
More photos can be found here.