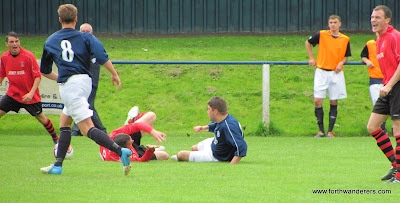 Forth began with new signing from Harmony Row, Chris Gordon, in the starting line up. Chris had played and scored as a trialist in a couple of earlier matches and looks to be another good addition to the new look Wanderers squad.

The home side started brightly and Forth keeper Hutchison had to look lively in the opening minutes to block at the feet of an advancing forward. Connelly was next to threaten for the Vale when a neat turn and shot skimmed the top of the Forth crossbar, although the referee, who had a decent match, pulled the play back and awarded the Vale a free kick for an earlier infringement. McMillan was next to try his luck for the home side but dragged his shot wide.

The Wanderers were seeing plenty of the ball at this stage without creating any clear cut chances although Martin Harty was leading the line well and causing problems for the home defence. Chris McGroarty almost broke the deadlock when his netbound shot was deflected narrowly over the bar by a defenders head but the opener was merely delayed and it arrived on 22 minutes. Martin Harty controlled the ball just inside the home box and seeing the keeper slightly off his line calmly lobbed his shot into the far corner of the net for a quality goal. Vale of Clyde pressed for an equaliser but Forth keeper Hutchison was equal to their efforts although John Connelly should probably have done better than heading over, when presented with a clear opportunity in the box. A fairly even first half then, with the home side perhaps having the better chances but the Wanderers with the only goal. 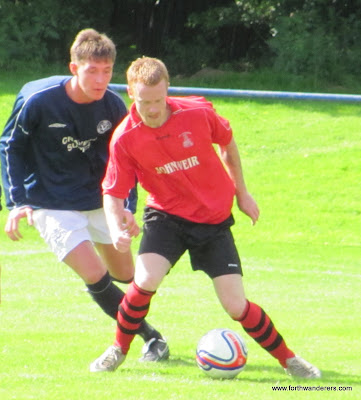 Forth began the second half purposefully and Chris Gordon flashed a header wide just after the restart. Martin Harty then found Tony Traynor in the box and the wingers header rebounded back off the post and appeared to strike a defenders arm but the Wanderers appeals for a penalty were waved away. Hepburn went close for the Vale as they attempted to get back into it but it was Forth who were looking the more likely at this stage.

A fine Jamie McKenzie ball then allowed Gordon Murphy to beat the offside trap but he screwed the ball wide with the goal at his mercy. The Wanderers finally doubled their advantage on 78 minutes when a cross come shot from Chris McGroarty took a deflection and evaded the despairing grasp of home keeper Gordon to nestle in the back of the onion bag. Forth comfortably saw out the remaining minutes to record a second consecutive clean sheet.

Overall, a close contest, with the Tin Pail having the better chances in the first half and the Wanderers controlling the second period for long spells.

Photos from the match can be found here.