Despite an excellent performance, the Wanderers exited the Scottish Junior Cup yesterday, going down 2-1 to Yoker at Holm Park in a pulsating match.

Forth made two changes from the Vale of Leven match, Scott Gibb coming in for the injured Stephen McQuade and Chris McQuade replacing Gordon Murphy wide on the left.

The Wanderers began brightly taking the game to the home side but it was Yoker who struck first, scoring in 8 minutes. A corner from the right evaded the Forth defence and deflected off the Yoker number 5 and into the net although he didn’t seem to know much about it. Undeterred the Wanderers continued to press and forced a couple of corners before being awarded a penalty on 16 minutes when a home defender was adjudged to have handled the ball in the box. Manager Jamie McKenzie stepped up but the home keeper got down to his left to save and also managed to block the rebound from Chris McGroarty.

On a rare Yoker foray up the park, Forth keeper Hutchison saved well before ,at the other end, a McKenzie corner found McGroarty in space outside the box but the keeper blocked his shot. Good play between the Yoker 7 and 8 saw the latter with a clear sight of goal but he shot wide.

Forth levelled on 26 minutes when good work from Chris McGroarty found Chris McQuade wide on the left and his cross was turned into the net by the Yoker number 4, with Chris Gordon waiting to pounce. This was no more than Forth deserved for their positive play, belying the fact that Yoker were two divisions above them.

The Yoker number 3 hit the top of the crossbar with a rising shot while their number 8 beat Hutchison to a cross ball but headed narrowly wide. Forth had a McGroarty shot which he sent wide after good work by Canning and a Crawford attempt which flew over and overall could be happy with a positive first half performance. 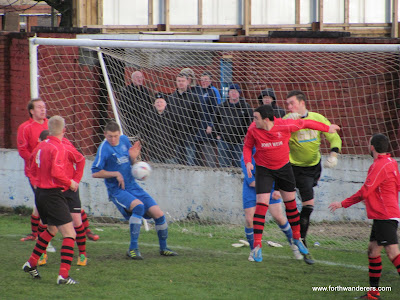 The home keeper, who had an excellent game throughout, blocked a Harty shot with his feet at his near post early in the second half as the Wanderers again began on the front foot. The big striker had another shot blocked for a corner as Forth continued to press although as the half wore on Yoker were seen more as an attacking force and Hutchison was called into action on a couple of occasions. Good work by McGroarty, who was on the receiving end of several hefty challenges throughout the game, set up Chris Gordon but again the home keeper blocked the resultant shot with his legs. The keeper was called into action again minutes later rushing from goal to block a McGroarty chip as Forth searched for the lead.

However, it was Yoker who regained the advantage when a free kick from the left again evaded both Hutchison and his defence and was bundled in at the back post. Forth re-doubled their efforts and went all out for an equaliser, utilising all 3 substitutes as the game ticked on. Manager McKenzie was sent off, receiving a second yellow for simulation after going down in the Yoker box to add to the one received earlier in the half for a late challenge, but still the 10 men pressed forward. Goalkeeper Hutchison came up for a late corner to no avail but the Wanderers created one final chance deep into injury time. Gordon Murphy bent a tremendous shot from out on the right, which looked to be heading in but hit the inside of the post instead and when Chris Gordon’s follow up was saved the Wanderers cup challenge died.

Overall, a game Forth never deserved to lose after playing some excellent passing football throughout but goals win games and Yoker scored one more. This Saturday the Wanderers face the current league leaders Maryhill at Kingshill Park in what should be an intriguing game.

A few other photos can be found here.